Characteristics of this ability include

• Description of another writer’s project in a way s/he would recognize that also creates an opening for the student’s own claims.

Throughout my college experience, and with this course especially, I have gained a lot of experience with writing academically. I have learned that essay writing takes many forms and requires many different lenses through which to focus ideas. One of the biggest challenges for me was to separate an author’s ideas from my own, clearly define their own project, and then add to the conversation myself. More than just using evidence to support my own claims, this process of “forwarding” and “countering,” as Harris puts it, requires a lot of careful thought and practice. In order to get a good idea of what another author is trying to say, I learned how to annotate articles in order to define their project in a way the author would recognize. From there, I can begin to formulate how I can further their argument or find where I disagree. 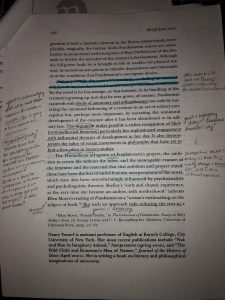 I also made a lot of progress with my ability to read multiple texts and find ways in which they connect. I feel as though this is most strongly showcased in my final essay, in which I compare two articles that address the same scene in Mary Shelley’s Frankenstein. One article argues that the Creature’s demand for a female companion is rooted in the idea that he wants to exercise the societal notion of male superiority over females, while another article posits that he asks Frankenstein to build a partner as a way to define himself as his own species, separate from humans. While I agreed with one perspective over the other, I used both as a way to then forward my own argument. 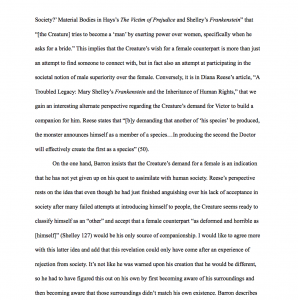 Characteristics of this objective include the ability to

• Work with primary and secondary texts, synthesizing others’ ideas with their own

• Evaluate sources e.g. for relevance, age, and prominence of venue

One very exciting assignment this semester gave the class the opportunity to explore the Maine Women Writers Collection which contains many archival materials. I examined a book of poetry by Celia Thaxter, made a claim about it, and determined how I would frame the use of the book in a larger conversation. Evidence of this can be found in Blog Post #8 here: https://gfortin.uneportfolio.org/2019/03/20/eng-334-blog-post-8/. In addition to the MWWC, I gained skills in searching online for secondary sources through the MLA Bibliography. It was here that I found the article with which I constructed my midterm essay, as well as most articles included in my final essay. I was able to use limiting factors on the left sidebar to restrict my searches by year and article type.

In this course, I learned about different schools of literary and cultural criticism which I could then apply to various readings in order to gain deeper understandings of them. For my midterm, I decided to use a philosophical lens to examine how Mary Shelley characterized the Creature and his development. Using this school of thought, I read about Locke and Rousseau, as well as Shelley’s inclusion of these philosophers in her work.

• Approach writing as a recursive process. Some markers include using

– making local revisions that enhance the clarity of one’s prose

• Presents research findings orally within the conventions of the discipline. Some markers of effective oral communication include

– Attention to differences between oral and written presentations e.g. intonation, volume, emphasis, sentence length and complexity, use of voice markers and signposting, balance of academic and colloquial language

This course taught me so much about the process of creating an effective presentation. While the process seemed daunting at first, I came to recognize that each tedious step is integral in creating a finely tuned and substantial project. During the planning process, I hand-wrote notes in order to help determine what I wanted to focus on. I then made an initial search in the MLA database for potential sources and took brief notes on those as well. Next, I drafted a proposal, talked with peers, and proceeded with a rough draft for my presentation. Through a lengthy peer-editing session, I provided feedback for another student’s work and received criticism of my own work. I used these comments to further revise my own project. 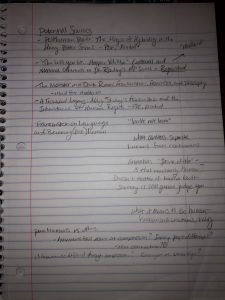 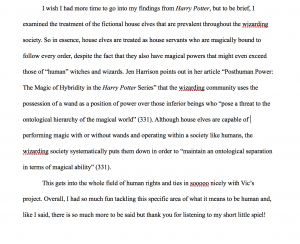 When it came time to prepare a version of my paper with which I would present my findings, I had to think carefully about my audience. My first presentation had a time limit of ten minutes, and it was in front of my peers from this course, so I was able to cut out some expository material that would have been required for an audience that was unfamiliar with my primary sources and with the topic in general. For the CAS Spring Symposium, however, not only did I have four minutes to present, but the audience was a mixture of well informed and uninformed attendees. In this environment, I learned how to extract only the most necessary information and present it using colloquial that could be easily understood by many. In both cases, I learned how to write in a conversational tone and read from a page in a way that sounded as little like a robot as possible.